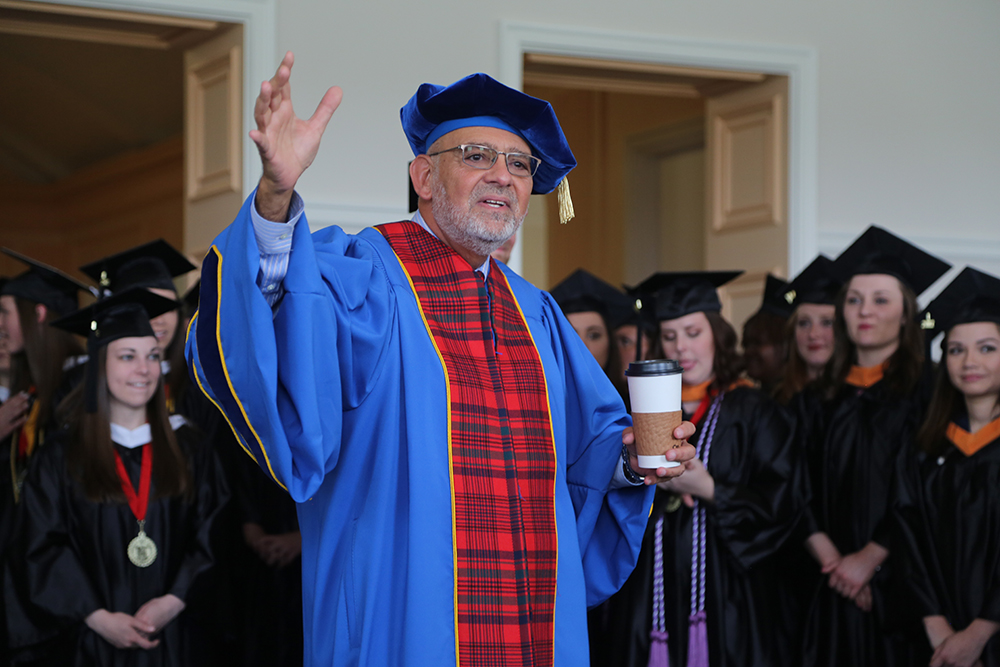 In a statement to the Board of Trustees on February 23, MacMurray College President Dr. Mark Tierno announced his intention to retire from the presidency effective July 1, 2019. The Board has accepted his resignation. Tierno served as the 16th president in the College’s distinguished 173-year history.

Tierno has led the institution since 2015. His accomplishments include the development and adoption of a comprehensive strategic plan, an expansion of relationships with alumni, substantial fundraising growth, a positive accreditation review by the Higher Learning Commission, multiple building renovations and several strategic property purchases. Tierno also has become well-known for his popular 2017 MacNation cross-country alumni tour in an RV.

“My four years at MacMurray College have been among the most enjoyable and productive of my career,” Tierno said. “My main goal has been to partner with the College’s trustees in efforts to put MacMurray on a clear path toward institutional success. I came here when the College was facing several challenges, a few unexpected, but with the ceaseless support of staff, faculty, students, alumni and trustees, we are confident our institution is moving in the right direction. I should add that I never could have expected to be so warmly embraced by MacMurray’s alumni and campus communities; this place is special, the people are remarkable and MacFam (MacMurray Family) is real.”

Tierno had previously served as the President of Cazenovia College (New York) from 2000-2015. He has also held leadership positions at the University of Wisconsin-Sheboygan, Elmira College (New York), Lake Forest College (Illinois), and the University of Pittsburgh (Pennsylvania). His future plans include relocating to his home in Chicago, investing in a business with his son and returning to his writing. “I’ve wanted to return to these undertakings for many years and now is the perfect time,” Tierno said.

Board of Trustees Chair Charlie O’Connell stated, “Mark will undoubtedly be missed, but we understand and support his decision. His role over the past four years has been crucial and he will forever have MacMurray’s collective gratitude. Mark may not have had the longest tenure, but his time here was impactful, and his legacy is certainly distinguished. We are all grateful for the experience he brought and guidance he’s provided.”

In response to a request by the Board of Trustees, transitional leadership was accepted by the College’s Provost and Vice President of Academic Affairs and Student Life, Dr. Beverly Rodgers, who will serve as Interim President. O’Connell affirmed that Rodgers’ appointment will provide a seamless transition as the College begins its presidential search.

“I will be honored to continue the good work of Dr. Tierno,” Rodgers stated. “We are not standing still and will continue to move forward on infrastructure, curriculum growth, new faculty and staff, and fundraising.”

A presidential transition team is being assembled and the College will begin its search immediately. A plan to celebrate President Tierno’s tenure is in development.

Back to MacMurray College news.